***Update March 2019***
Since this is one of my most popular posts, I wanted to update it and provide information on a way I'm now using to make round soaps. 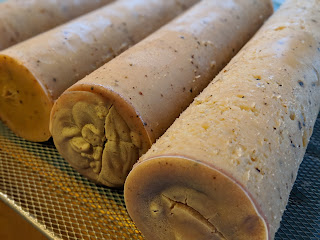 I recently received an order for 5200 round soaps. In fulfilling this order I went back to using the 3" PVC pipe. The difference maker, however, is I'm using a liner (these Flexible Plastic Cutting Board Mats

This allows the soap and liner to slide off the PVC pipe MUCH easier. The liner is then simply unrolled from the soap.

If you use this method for round soaps, one thing to keep in mind is to cut the PVC pipe no longer than 12-13 inches. The hardware store you buy the pipe from should be able to cut it for you. You don't want it longer than this because the soap will continue to heat up inside the mold and if it's too long then too much heat could cause your soap to volcano.

Also, to avoid volcanoing, it's best to let the soap cool to less than 120 degrees before pouring in the pipe.

This time it was going to be different. I needed a round mold for shaving soap and had heard about people using pvc pipe. I was leery. It seemed, and stories on the internet confirmed this, that the soap would be hard to get out of the mold. My boyfriend came up with the idea of cutting the pvc pipe lengthwise on one side.  This would allow you to open the pipe slightly to loosen the soap. Ok, worth a try.

Now, I could post this picture below and tell you how wonderful this new mold worked, but I'd be lying. 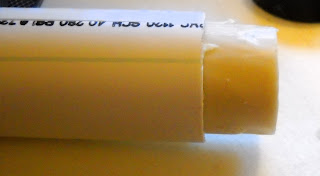 There was A LOT of swearing and pounding on the ground to get to this picture.

Here's how the soap started: 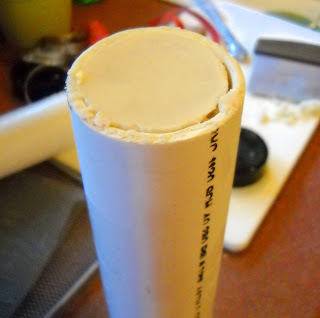 I used a smaller pvc pipe with an end cap on it to push the soap out of the pipe:

This helped some as did the cut in the pipe, however the process of removing the soap was HARD, something I don't plan on doing again.

My next thought was that we needed to make two cuts to the pipe lengthwise.  Basically, cut it in half lengthwise.  I could tape the pipe together with duct tape while soap was in the mold and when the soap was finished I could remove the tape and pull the pipe apart.

Great idea!  So last Friday evening found me over at my boyfriend's house about to go for a burrito at the food court and a beer at the bar. The night was young though and I thought we could run to the neighborhood hardware store and get a 3 inch pvc pipe before the store closed. That way, after we got back from the bar the BF could cut the pipe and I'd be all ready to try again Saturday morning.

Off we went to the hardware store. Now, I just want to say here that I LOVE hardware stores! I'm not talking about the mega-sized Home Depots of the world. I'm talking about the little neighborhood hardware store that has it's front door that open to the sidewalk not some huge parking lot.  The stores that will have sleds and snow shovels in front of the store when that freak snowstorm hits in March and not the BBQs and table umbrellas that the corporate headquarters in Texas thought everyone should be buying in March.

I see hundreds of things in these stores that I need and didn't even realize! It's fantastic! I once bought these cool solar lights for the yard that changed color for $5! I saw the same lights in a gardening catalog for $28!

The BEST thing about these stores though is the popcorn! Forget movie-theater-popcorn. Hardware-store-popcorn rocks!!  It comes in these little bags that are the perfect size for one person to eat while they're roaming the store thinking of all the great things they could do if only they had the time AND it's free--the popcorn!!  Awesome.

Anyway, I digress, we were there for pvc pipe. While looking at the pvc pipe the BF picks up this flashing-like thing. Obviously I don't know the name of the object but it was over in the plumbing section and I think it's called flashing so I'll go with that.

He rolls it up and describes how with 3 inch pvc caps on the end of it and clamps around it a perfect soap mold would be created. GENIUS. At least it seemed like it. I bought it and the following morning I tried it out.

Here it is with soap and after I released the clamps: 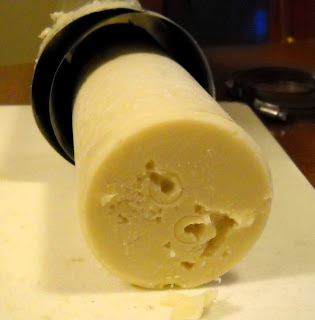 It seriously worked that good! That soap just popped out! 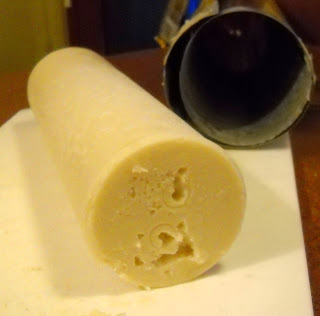 No swearing or pounding necessary!