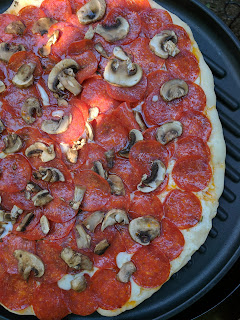 What's a person to do when it's hot out, you don't have air conditioning, and it's PIZZA NIGHT!? It's like the perfect storm, right? Lucky for you, I have a workaround to this vexing issue: grilled pizza.

Although I had heard of people grilling pizza before, it still wasn't an easy decision to grill our homemade pizza. If it didn't work pizza night would be ruined and there's no coming back from a ruined pizza night. Disappointment would be lasting.

None the less, I maintained a positive-can-do attitude and did not show any doubts as I boldly laid our homemade pizza on the George Foreman grill

confidently reassuring everyone that it would work; no problem, the internet never lies!

As it turns out, at least in this case, the internet didn't lie! You can grill a pizza, although oven cooking it is still our preferred method.

To grill our pizza, I set my George Foreman grill

to the highest setting (5) and let it heat up for about 3 minutes.  I then placed the pie on parchment paper directly on the grill.

I cooked it covered on the grill for about 30 - 40 minutes until the toppings were well done and the dough was fully cooked. 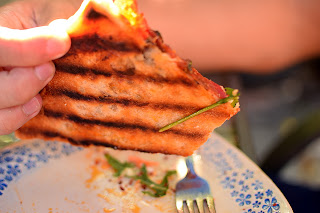 The bottom of the pie looked beautiful and had a nice crunch to it, as though it was cooked on an open fire. 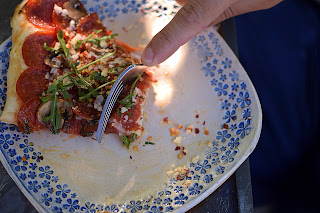 Grill cooking doesn't get the pepperoni crispy and oily which, let's face it, if you're putting pepperoni on your pizza, you want it crispy and oily!  However, if the choice is heating up an oven on a hot day or non-crispy pepperoni, I'll take the latter (notice forgoing pizza altogether was not an option!)