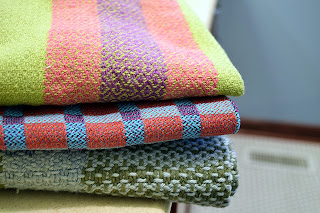 Saturday I took a weaving class as you probably know if you've read my blog or have seen any of my Instagram posts.

I arrived to my class a little after 11 and was immediately shown the loom I would work on.  I picked out a few pieces of fabric choosing the colors and textures I wanted.  My "class" included 6 hours of work on the loom and fabric enough for a 3 X 2 rug for which I could keep.

Joel, my instructor, advised me not to worry about picking out all my fabric at once but just get a start and see where it takes me.  With that advise, I picked some blue and brown felted fabric.  I love the feel of nubby, knotty rugs under foot and wanted the rug I made to feel that way. 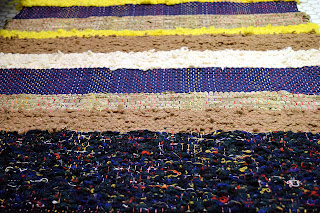 With minimal instruction, such as how to work the heddles (shedding), "throw the shuttle", batten, move the temple, and advance the loom, I was on my way weaving!   By the time I looked up from what I was doing it was 2:00!

Weaving can be very therapeutic and physical.  Throwing the shuttle and battening the fabric involves upper body work.  I was a little hesitant at first to really slam the weft against the fabric but Joel assured me I was not going to break the loom and the harder I slammed the weft the tighter the weave would be.

Temples are used to maintain the warp's width.  I was instructed to move my temple after 3 or more inches of weave.  Doing so meant my rug would be straight along it's edges.

Shedding involves stepping on the heddles with your feet to raise and lower the heald frame to create a clear path for your shuttle to move between.  On the loom I was working this involved lifting your entire leg allowing for a nice lower body workout!

Time passed quickly as we talked and worked.  There was another lady in the studio working on a table runner.  Discussions of kids, grandchildren (theirs not mine), and other hobbies ensued.  Joel took up weaving after his 4 children grew up.  He was walking by a studio one day and looked in the window and thought he'd like to give that a try.  Eight years later, he's now president of the Portland Weavers Guild.

By three I had reached the end of my rug.  Joel finished it off by weaving an inch of thread then cutting the rug from the warp.  He then folded over the woven threads and stitched them on a sewing machine. 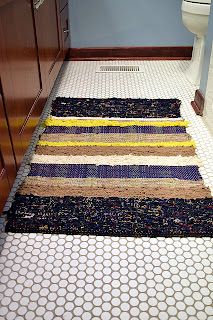 By four, I was on my way home with a beautiful rug for my bathroom and a great experience!  Joel's studio is open for private instruction and classes.

If you're in Portland, check out The Gathering of the Guilds Sale at the Oregon Convention Center the weekend of April 22.